KINH NGHIỆM Working for a Startup?

The question can be only answered whether the startup company is a High-tech or it is a virtual slavery shop - a low-tech startup. Where is the difference between HIGH-TECH and LOW-TECH startup company?

First of all, a HIGH-TECH startup is a starting company with a real high-tech product or business model which is virtually non-existent on the (virtual and real) market. A biological DNA drug, for example, against the Covid19, or a groundbreaking Hardware product, or a Software algorithm (app), for example: a new Smartphone with holographic camera (together with holographic imaging software) is a HIGH-TECH product. Facebook was a NEW business model because as Zuckerberg started there was virtually NO such a social network. If a startup launches a product or a business model which is a copy of an existing product or business model this startup is NOT a HIGH-TECH startup, but a LOW-TECH copy. Google was at the begin a LOW-TECH shop, because its search engine was a copy of the existing business model of Yahoo's search engine. Google's search engine has been more successful than Yahoo's one just because its search engine worked faster. Then Google becomes a HIGH-TECH company as Google rolled out some new algorithms (e.g. MRA, AI-Translator) or acquired potential-new products (e.g. Youtube, Android).

Are Grab, Ueber, Gojek and all kinds of servicing "Startup" High-Tech shops? NO. Let's check the business model of:

If you carefully analyze the starting business model you have to admit that MOST of the startups are very low-tech. Their model is usually a copy of a traditional business model. Grab copied the "Xe-Ôm" model invented by someone who was too poor and desperately tried to improve his income using his motorbike as a two-seated taxi. The same can be said to Gojek. Uber "stole" the business model of "Car Rental" (e.g. Avis Rental Car), and later the idea of food delivery, etc. from a supermarket (e.g. Walmart). The only different is that the market becomes virtual and is moved into the Web. To do that startup founder won't need to be a superdeveloper, nor an IT expert, but a savvy, vile entrepreneur with a great portion of good luck.

Savvy? Yes. Xe-Ôm was invented long ago in Saigon and elsewhere in SE Asia. The Internet becomes popular since 1991 (the WEB became public: click HERE for more details). But as the Mobile Phone and PC become two most common gadgets the WEB is really accessible for everyone. Those who could perceive the connection and the relationship and were savvy enough would see the new (virtual) market which enables a direct access between products and consumers.

Vile? Yes. You must be very vile and absolutely reckless if you want to be successful. The classic market is a human chain of producers, wholesalers, retailers and finally the consumers. It's the REAL market with REAL value-adding people. In such a real market the ware distribution is continuously: producers with employees/workers - wholesalers with sales representatives - retailers with salespersons - consumers. The wealth is distributed equally among the participants (producers, wholesalers, sales representatives, retailers, salespersons), while the virtual market eliminates the in-between layers: wholesalers with their sales representatives, retailers with their salespersons. It exists only the web middlemen: the Web-Startup founders or owners. To be successful the Web-Startup founders must be vile and reckless enough so that they could run such an exploiting business. A business that gives the founders (or owners) a direct control over every single worker (or employee) who usually does not know each other, and it requires neither large warehouses, nor expensive affiliates. An elegant bypass of the (labor) union and the real capital liability. Workers (or employees) are deceived as the "micro-entrepreneurs" who bear all the expenses (hazardous health, insurance, capital liability) while the startup founders (or owners) bag the profits from the real work of their "micro-entrepreneurs". That is the newest vileness with legal slavery in our modern day.

Good Luck? Of course, every exceptional-successful business is like a win of a lottery jackpot (by good luck which is in combination with savvy and vileness.) Millions of people tried to ape the AMAZON online business model (which is the virtualized classic form of the "Catalog" or "mail-oder" business model), but only ONE Jack Ma won the jackpot.

The following blog of the Conversation tells you more about the exploiting-but-legal way how an "Internet Business" is made: Startup founders as the "middlemen" between drivers and clients. Startup capital: just a simple-little mobile-app, a lot of money in return. Not a single drop of sweat for the founders. Tons of sweat for the drivers. 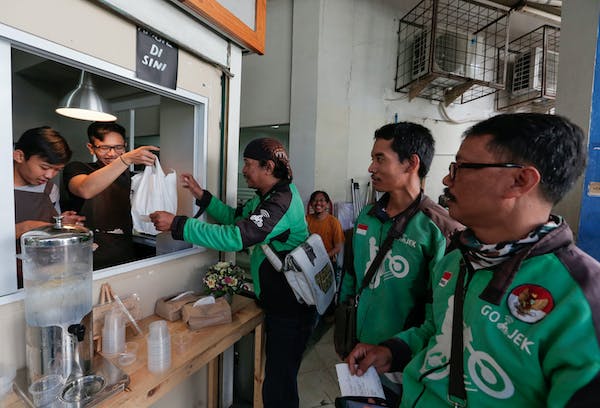 The answer is: Avoid to work for a LOW-TECH startup (e.g. GRAB), and if you're an adventurous person then a HIGH-TECH startup is the place where you can start your adventure.