Java Essentials For Newbies And Developers 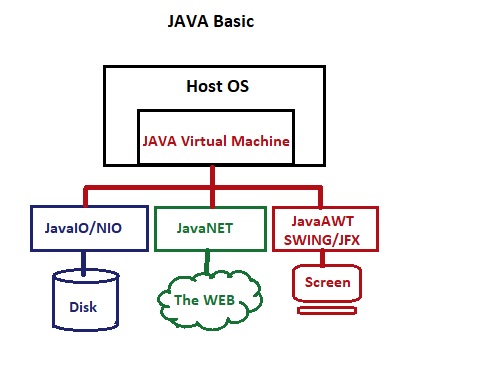 Fig. 1 shows you the basic JAVA structure in a Computing Environment. JAVA is NOT merely an Object Oriented Programming Language or OOPL, but itself a Computing Machine (Java Virtual Machine or JVM). Hence JVM works as if it was an computer with its own Operating System or OS.

I. JAVA BASICS for NEWBIES
This basic tutorial preconditions that you, as a newbie, should have the fundamental knowledge about the OS you are working with: WINDOWS or LINUX/ANDROID or iOS of Apple.


The basics of JAVA are the understanding of the System Path (SP) and Working Path (WP.) As said, JAVA is itself an OS. Therefore JAVA has its own System Path and Working Path, too. Because JAVA is a "Guest" of another OS it has to rely on and to adapt the Host-OS environment with its own SP, WP.
The System Path is the list of paths which lead to the commands and the necessary components. JAVA is usually installed, for example, in the "Program Files" directory on WINDOWS.

WORKING PATH
Your installed JAVA will be placed in the path, for example, "c:\program files\java". If you want to installed your JAVA in other path than this path you have to include this path into the PATH. Example: PATH=%PATH%;c:\java\jdk\bin (and similar for LINUX).
The CURRENT PATH or USER DIRECTORY is the path where you're currently work with.

Host OS and JVM always search for the given name as following:
- Firstly in the WORKING PATH
- Then in the paths included in PATH
If nothing is found error message is thrown. It's clear that the sequences in the PATH decides the access whether it is SLOW or FAST. Hence the path of the most frequently-used apps should be the "head of the queue".

CLASSPATH
As said, JAVA is in itself an OS that runs on the JVM. And the principles of OS are the PATHs like any other OS. JAVA PATH is the "CLASSPATH". The CLASSPATH contains initially all API classes (which are compressed in a JAR files and can be found in the subdirectory "../java/jdk/lib". Your own JAVA classes or JAR files must be included in this CLASSPATH. Otherwise they are missed and you get the stupid error message "Class not found". All other resources (images, data files, etc.) must be included in the Host PATH. If you forget to do that you get the same stupid error message saying the referred wasn't found. When JVM executes a JAVA app it firstly tries to load the named classes into its memory (heap/stack) by searching them in the CLASSPATH. Error is raised if one of the classes aren't found in the CLASSPATH.

WORKING WITH JAVA
Any text editor will work (e.g. "notepad".) If you're working with a "sophisticated" IDE (Integrated Development Environment) you have to be cautious about the mentioned CLASSPATH and the Host OS PATH. All the IDE relevant paths must be included to the mentioned paths accordingly. If you missed to do that your IDE won't work correctly and, worst of all, the IDE app run fine with IDE, but outside IDE it fails to run. Weird errors such as "file not found" are presented. If you work with a good Text Editor and compile the sources on a CMD-terminal (or CMD-Window) you have to include the "current directory" into the CLASSPATH so that the compiled codes could be executed by JVM. To do that the simplest way is as following (WINDOWS):

PHP:
The dot BEFORE the semicolon always indicates THIS directory (meaning current or user directory).

JAVA LANGUAGE
To access directly WINDOWS or LINUX users have to know the SHELL language and OS-commands. JAVA Language is the "SHELL" and "javac, java and some others are JAVA commands. The greatest disadvantage of IDE is that IDE shields its users from the SHELL (by suggesting APIs and Methods) and from the JVM commands.

JAVA language is an Object Oriented Programming Language (OOPL) which was based on C and influenced by C++. JAVA simplifies OOPL and disentangles some OOPL complexities: single Inheritance, strong types and standardized language structure.

PHP:
Note: other JVM commands (with .exe suffix) can be found in the subdirectory../java/jdk/bin

PHP:
If a class is declared protected this class is only accessible for other package members.

JAVA TYPES
If you've worked with C you'd be familiar with JAVA language. The command structure is C -meaning short, but comprehensible. All Computing Units (CU) are signed as positive or negative.

PHP:
if all global numbers are not initialized and used inside a method they have the value 0. Same for all global Objects. If uninitialized local primitive or local object is used error pops up during the compiling time.

PHP:
JAVA BLOCK
A JAVA block is a group of JAVA expressions and data (i.e. variables). A block can be either a class itself, or a method, or a lambda expression. A JAVA block always starts with an open Curly Bracket { and ends with a close Curly Bracket }. Example

PHP:
OBJECT
Beside the primitives JAVA OOPL also works with complex structures which combines executable codes and data of any type or other structure. The complex structure is called Object (in the old fashion: struct in C, for example). Simple form (like C "struct") has the acronym "POJO" or "Plain Old Java Object". A JAVA object is declared by the keyword class

PHP:
The codes of an object are arranged and structured in several groups to do some certain work. The "group" is called METHOD (in the old fashion: a function is when it returns a result (primitive or object), otherwise it's a procedure -meaning it returns a void).

Data which could be some primitives or other JAVA objects are the variables a JAVA object works with. Data within a METHOD is the LOCAL variables (or data). Local variables are inaccessible by other methods. Variables outside all methods are GLOBAL data and can be accessed by all methods. Accessing local data is always faster and more efficient than accessing any global data. A good developer won't waste with global data if he mustn't.

THREAD AND TASK
First of all: a process is a "working procedure unit" that produces a predetermined result. Thread and Task are independent processes which are only different from the environment how they work with. Thread shares the environment of its parents while Task doesn't. Shared objects and variables (of threads) must be synchronized between each others. Therefore working with threads is more sensitive and complicated than working with tasks. Btw., a Thread could be seen as a simplified or a lightweight Task. In the Advanced Sessions I show you how to work with threads and tasks.

JAVA thread is always an extension of Object class Thread or an implementation of the Runnable interface.

JAVA task is usually an implementation of the Callable interface in combination with the "bearer" Object class FutureTask and usually in use with the special JAVA service ExecutorService.

SINGLE INHERITANCE
Inheritance is the core of an OOPL. If an object which is "extended" and shared the structures (methods and data) of its parents is called child object and the shared part are the inheritance. Too many "parents" like in C++ could lead to entangling of clarity (e.g. which parents of a certain method/object when all parents have the same method /object name?). To avoid this complicated inheritance all JAVA objects are children of ONE parents (Object). And each derived object can only have ONE derived parents. Example: Object JPanel

PHP:
If you want to individualize a JPanel you derive your object from JPanel, but you cannot derive from Jpanel AND JFrame (double inheritances). To do that you use the keyword extends

PHP:
For the case that you do need "more" functional solutions which won't exist in the desired object JAVA offers you a leeway called "INTERFACE". With the interfaces you can "expand" your individualized object as far as you could. The keyword for that is "implements". Example:

PHP:
With the interfaces to "ActionListener" and "MouseListener" you need only to IMPLEMENT (hence the keyword) the required methods with your wished functionality. Single Inheritance with 2 leeway to ActionListener and MouseListener. That's is the reason why JAVA is so superior.

STATIC, VOLATILE, SERIALIZABLE, TRANSIENT
When something is immobile, fixed and invariable it's STATIC. A static object or primitive is in JAVA like a constant that stays forever "fixed" in JVM memory. Hence static objects and data are "heavy" like stones in Memory and shouldn't be used exaggeratedly. A JAVA app is started by the method static void main() by common Java or static void launch() by JavaFX (or with the implemented start() of JavaFX-Application object).
By objects or data that are declared VOLATILE JVM (and compiler) always reads their value from main memory and follow happens-before relationship on visibility of volatile variable among the threads. If you aren't sure with VOLATILE variables you should avoid using them and rather work with synchronization (keyword synchronized).
Object that is implemented with the interface Serializable (which hasn't any method needed to be implemented) can be saved (written). And its "frozen" state of its data can be retrieved (read) and reused. However, data or objects that are declared "TRANSIENT" won't be saved in this case and their state gets lost. Example:

Dear all,
Poll is closed. Only ONE member showed his/her interest. it seems that most of other Congdongjava members are good with Java and won't need any further tutorial. Thank you all for your participation. Thread is closed.
Joe